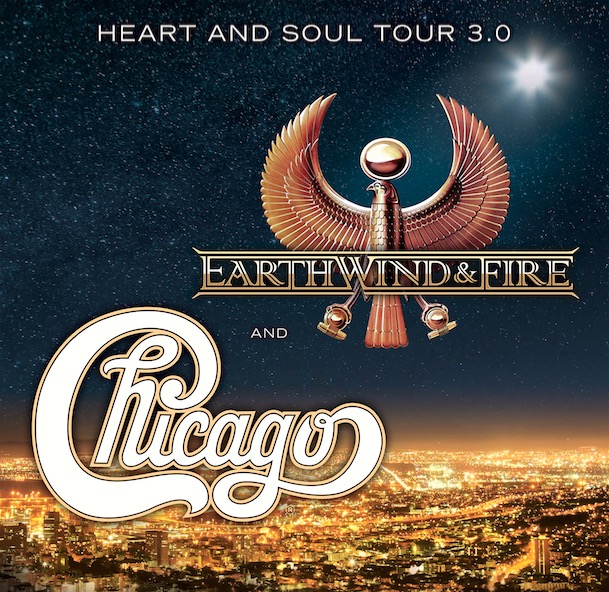 Due to popular demand, two of the most successful and critically-acclaimed bands CHICAGO and EARTH, WIND & FIRE announced their fall 2016 HEART AND SOUL TOUR 3.0, a 15-city trek across the U.S. and Canada following their hit summer 2015 Heart and Soul Tour and spring 2016 Heart and Soul Tour 2.0. The tour, promoted by Live Nation, will allow fans across North America the opportunity to see the Grammy Award-winning and multi-platinum selling groups live beginning October 19 in Rochester, NY. The tour will continue through U.S cities such as Manchester, Albany and Eugene as well as make its first extensive run throughout Canada, visiting cities such as Montreal, Winnipeg and Vancouver. The tour will conclude on November 13 at Rimrock Auto Arena in Billings, MT.

“Chicago and Earth, Wind & Fire… The Heart and Soul Tour has thrilled audiences across the USA,” Robert Lamm of Chicago said. “Now it will be an honor to bring this celebration to our fans in Canada, finally! And it’s our honor once again to share the stage with our brothers.”

“There’s a saying that goes, ‘if it’s not broken there is no need to change it,” Indeed,” says Philip Bailey of Earth, Wind & Fire. “The powerful magic of Chicago and Earth, Wind & Fire works for both bands and fans alike. Here we go again!”